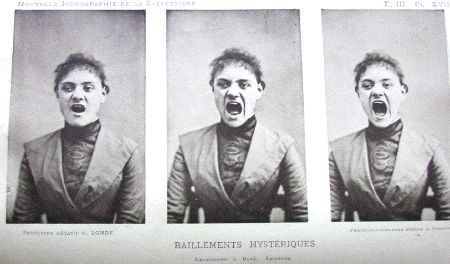 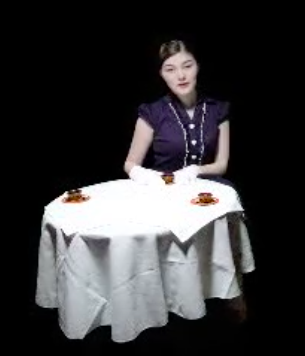 This is one scene I sent actress Tomi Heady for our Depthkit 3D volumetric shoot for the VR narrative game Atomic Vacation. After this, I think doing Beckett will not be a problem for her. Rae is the imagined/remembered love interest and teacher of Shizuku, a little robot girl from the near post-apocalyptic future. The lone inhabitant of a rocket ship carrying an archive of “all human knowledge.” Her mission is to “re-instantiate” the human if the Earth becomes uninhabitable.

Rae is the manifestation of the future human being born.
Rae is an experiment.

She is both doll like —dress (relating to cosplay) almost cartoonish. She inhabits an uncanny space that is vaguely domestic and feminine and childlike.

She is the hysterical woman. She is improper. She is obscene. Her “I” is too big for her (Mayakovsky) body and what is invisible, unseen, even subconscious, is manifested upon her body in the form of repeated gesture.

Her words have become enervated, mere place holders for things that were real or lived at one time, but now everything is information. However, her words transmit information through paralinguistic qualities (pacing of speech, tone, loudness which communicate not via content, but which the recipient perceives and takes in viscerally.)

In each scene one or two emotions will drive you. These are the machines which generate gesture and influence way you speak (tone, rapidity, emphasis). They come from inside and are something that you are silently fighting with. These emotions are like spirits which possess you, you are attempting to be reasonable, logical but these keep spurting out. Think about slowing down or speeding up a word or phrase, spitting out a phrase or nearly singing it– however it fits the emotion. It does not have to make sense with the script, in fact, it can play against the words of the script, the main thing is that it has to be felt and expressed upon the body.

See contrast between emotion and proper dress in photo documenting “hysteria” I also like the slow emergence of emotion.

Rae wears the dress, she is barefoot and barehanded. Her hair is loose and being blown by a “wind” off the ocean.

EMOTION—
elegiac
Far away
alone
recrimination mixed with hint of regret. Loss of the world. Stupidity of humans. Rae is removed from the disaster in a way, she is the future human, she persists, she will live on as code, but internally, sadness or memory pulls her — causing gestures and emotion to manifest.

Facing into self, reading self, gesture that manifest and interrupts repeat/almost mechanical process of making.

Balls of sand are lined up like cannonballs or worlds which you pick up one by one, play with and destroy.

Picking up one ball at a time and holding them. Water.
Light.
Ground.
Sky.

Draw in ground with toe.
Home is where humans start from.
As we grow older
The world becomes stranger, the pattern more complicated
Of dead and living.

Humans are at a certain end. We have met a certain end. (hysterical- body clenches then relaxes. She sits, recomposing herself—maybe here, throws down the last cannonball?)

Rae sits, plays with sand letting it fall through fingers, stares at hand in wonder.
For a computing machine, a hand is no different from a mind (touching own hand as if not her own)
and I, to her, am no more or less than ocean.
A piece of information. A position banked in her memory.

Perhaps you, too, remember.
Even without a body, this Earth,
her terrain and horizon are
still carried in your code.
The Earth asks for nothing, except that we recall her.
She is what made us

(Rae draws a picture the sand with hand or awkwardly with toe?)

Human.(Repeat)
The Earth asks for nothing, except that you recall her.
She, is, in the end, what has programmed you to be.
Erases the word.

As it was in the beginning, even here, even now
the memory of these places
Demarcate the spaces of your perception.,
a home where a thought of a self may dwell and grow.

Draws a stick figure holding a square box with a handle.
I see us adding this archival image to background in Unity. Harold Agnew–plutonium core. 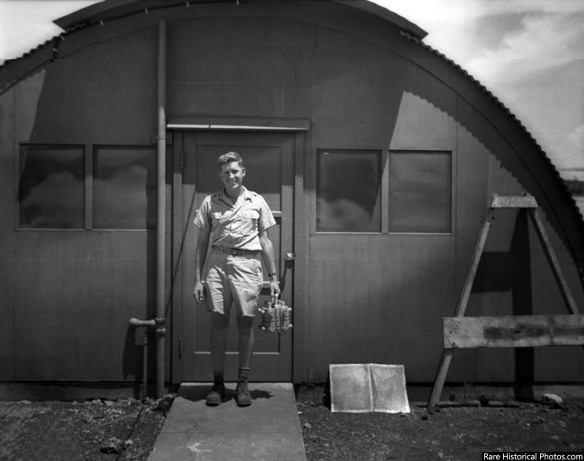 Here is a self, selves have names. This man has a name.
This man’s name is Harold.
If there was no Earth, would there could be no Harold.
How could he not have understood that?
And, you. too
Can you not see that this little box
that he holds in his hand like he’s holding his lunch
Will change the course of history?

She draws a smile

She destroys it violently.
(angrily)

To change the future, you must picture a different version of the past.

Does Harold eat a sandwich on the beach?
Is it peanut butter? Is it turkey?
Does he watch the waves, imagining
his sweetheart at home, her body
nearly naked in the pool?

(bitterly) In the end, what we believed turned out to be worth

opens empty hands like a Pieta, stares intently at camera.
Nothing.