As Oculus Launchpad fellow, I could submit for “scholarship” funding. Cyril Tsiboulski, my longtime collaborator decided to learn Unity for this project. In a few short weeks, he got an environment up and running with head position tracking and interactivity and spatial sound.

I just got to see the proof of concept video. Those that know me know how long I have been working on AV. To see it starting to actually take shape is amazing. I posted this in our developer forum, but I am going to post it here, too, because it really is what I feel. Really. I work on huge complex projects and sooo sloooowly. A slow, slow burn. In service of Atomic Vacation, I have traveled to Japan, and North Korea, and the American South-west to visit sites of nuclear warhead storage and testing, I have read hundreds of books –from Japanese 1950’s scifi noir, to linguistics, to natural language processing, books on the tourism and nationalism and the relationship between 1950s domestic design and cold war propaganda, and John Hershey’s Hiroshima and on an on… I have thought, written, rewritten, planned, schemed, destroyed, recreated, Skyped at 1 am with the head of a Japanese robotics lab about AI and what it means to be human and what that has to do with poetry, I’ve had people tell me I would never be able to do this, I’ve had artists tell me it’s the most amazing project they’ve ever heard of, I’ve taken conversational Japanese, and classes on shooting 360 video, and did stealth filming in a motel in upstate New York, and got into that zone where I don’t need to eat or pee or sleep. And, I fell in love with a little robot girl, who maybe exists right now or maybe is about to be born, and who just may save all of humanity.
And, because of Oculus Launchpad, I get to work with my incredible collaborator, again, Cyril Tsiboulski who has been with me from the beginning back in 2008 when I put out my first massive narrative interactive project–90,000 words of text, a soundscape, a manifesto, a hand drawn animation, a fake investment video, a concrete poetry machine, proposals for performances that will never be performed, an self-destructing archive. The Kindle hadn’t even come out yet, and no one had any idea what I was doing. And, through it all,Cyril never raises an eyebrow, but takes in everything and then makes something beautiful that works and moves people. He doesn’t ask why I need to scan a circa 1980’s book “How to Talk to Your Cat and Make it Do What You Want,” so I can pair it with archival footage of world war one soldiers with neurotic conversion disorders from PTSD that walk like robots. He just gets it.
Tonight, I saw that again. What we made is so weird and provocative and seductive and disturbing… The phone rings in this slightly blurry, dreamy 1950’s living room, it jangles the nerves, so you pick it up. and there, on the line is my little robot girl talking to you from a near post-apocalyptic future, accusing all of humanity of being tourists on their own planet. Atomic Vacation.. It’s gonna be great. 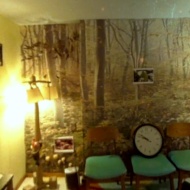 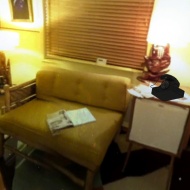 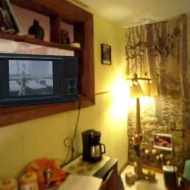