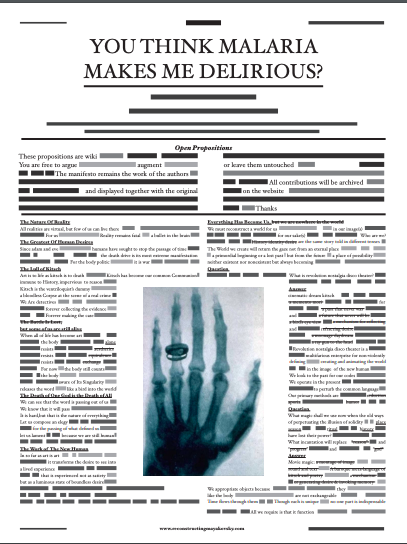 “Social distancing,” is a term we hear a lot recently. Although this phrase has emerged in the context of the Coronavirus, the fact is that we have already begun to practice it pervasively through our use of technology. The loss of life, economic value, productivity and the state of emergency, which for many of us is not new, but simply an amping up of the anxiety we’ve been feeling for the last three years, will come to naught if we do not see this as an opportunity.  Now is the time to seriously consider what is lost and gained as communication and “touch” become virtual.  I want to extend the term “touch” to encompass types of  existence in which having a vulnerable body is not something that is merely an inconvenient or horrible reality, one that must be dealt with, but an integral, valued aspect of living. In this way, I would extend “touch” to ecological systems. Our gut biome “touches” us. We “touch” our Earth, this only home for embodied creatures. To create and unlivable planet is to create a place without touch.

In 2007, Cyril and I put out an interactive narrative called Reconstructing Mayakovsky. (how I long to make this as a feature length VR!) It is 90,000 words of text –a proper novel–that is accessed through various “mechanisms”  including an “archive” based on internet links, that is necessarily, slowly accumulating 404 errors. I wrote it in response to 9/11. Inspired by Vladimir Mayakovsky, the Russian Futurist poet who killed himself in 1930 at the age of thirty-six, the novel imagines a post-nuclear war dystopia where uncertainty and tragedy have finally been eliminated through technology. It really asks what is lost and gained as the world becomes virtual. There is a very funny and very sad scene–you will have to play around to find it! in which the protagonist (VeraX) husband gets a blow job from a woman in “Real Time”, the toxic, almost unlivable world outside the virtual. There is also a fake investment video for the virtual world “OnewOrld” (so called because all difference, those inefficient drags on memory, have been erased–I will not go into the hegemony of what I call “Pixar aesthetics,” but you know what I mean) which decries the fact that “the human has become the weakest link in defense systems.” I did not make that line up, it’s a line taken straight from the DARPA website. You can access it here. The image above is from the manifesto I wrote. In the way of all good manifestos, it is over the top hyperbolic and poetic and aptly hysterical.  The design, created in collaboration with Pelin Kirca, replicates Roentgen’s original report of the discovery of X-rays in a German medical journal (accessed through that transcendent technology The WWW).  I love this image. X-rays make the body virtual, but Roentgen’s wife’s wedding ring, remains opaque, impenetrable.

The rise of big data and AI to provide answers to important questions, ranging from public policy decisions to whether your insurance will pay for a certain medical treatment, presumes that all that we need to know can be communicated into terms that disembodied beings can make sense of–the poetic, the intuitive, concepts like wonder and remorse are gone. (I  am a physician. I started out in molecular biology so I recognize both the incredible importance as well as the limits of science.) The emergence of emojis on FB at the same time that Oculus Rift became available to the consumer public is not serendipitous (nor is it an evil orchestration), it merely reflects the underlying understanding that there are aspects of human communication that need to be modified, commodified, codified so that machines can read them. But, to capitulate to the necessity of operating systems and RAM, is to capitulate to a loss of those aspects of being human -the nuances of voice, the tension in a neck, the half-smile, the body leaning toward you in conversation, which is part, is a fundamental (this is old brain) and incredibly pleasurable part of being human. The danger of touch has a history. Those who grew up in the 80’s when the transmission of a mysterious, deadly illness, now called AIDS, was still in question, remember this history.   Queerskins: ark, our newest VR experience,  revisits the story of Sebastian, a young gay physician estranged from his rural Catholic Missouri family who dies of AIDS in 1990.  In it, the mother reads his diary and allows herself to imagine him alive and in love. We filmed Michael DeBartolo and Chris Vo who play the lovers with Intel Studio’s 3D volumetric capture technology. There is very little dialogue in this. It was critical for us to tell the story through bodies and body movement because, on a meta-level, this work is about the dangers and pleasures of touch and embodiment. The last line of the dialogue is Sebastian’s who says “Touch me.” This segues into an intimate and at times very sexy pas-de-deux between the two men, beautifully choreographed by Brandon Powers.  The backdrop of the coronavirus puts the exhibition at risk, but also heightens awareness of the very question we are exploring.

I’d like to end these thoughts with a poem “Archaic Torso of Apollo”. I feel nowadays that only love and poetry are the only antidotes to this feeling of it being the end of the world. Rilke wrote this exquisite poem about seeing self in other and light as particle and wave. Art as physical and transcendent matter. Touching with the eye. The last line is utterly arresting. And, it means everything. So, yes, this can not be the new normal. We must change our lives. 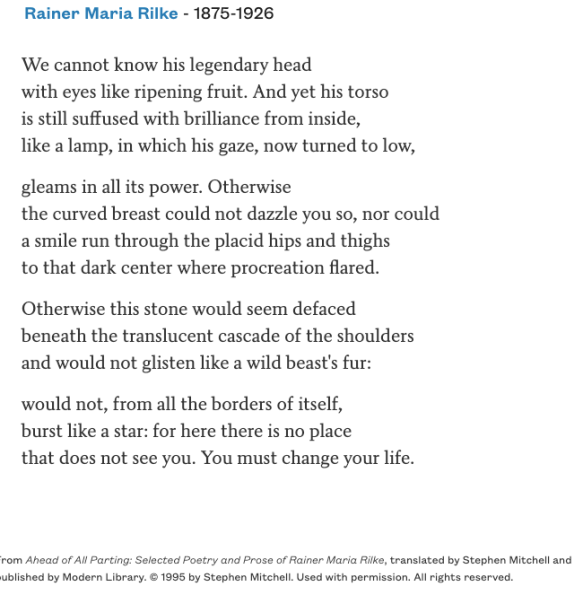